Charles Oscar Axen was born in Karlsborg, Sweden in December 1880 and arrived in Melbourne on the Orotana on 13 March 1902. He lived at High Camp for nine years, Western Australia for two years and Pyalong for two years, occupation labourer. Charles married Eleanor Maud Lawrence in 1905 and by 1916 they had four children.

At age 35 years Charles enlisted on 20 January 1916 at Melbourne and after training embarked for overseas on 16 July on the HMAT Suffolk. Before he left Charles became an Australian citizen in June 1916.

After a short period in England, Charles joined his Battalion, the 7th, in the Somme in November 1916 and within a month he was suffering trench fever. In January 1917 he was transferred to Horton Hospital, near London, and later to the 67th Battalion in a training role. Charles was promoted to Lance Corporal in April 1917.

Charles returned to France in October 1917 to take part in defending the German Spring Offensive. On 9 June 1918 he was promoted to Corporal. During the early days of the Allied Hundred Days Offensive, the 7th fought a major action at Lihons and on the first day, 9 August, Charles received gun shot wounds in his left leg. Within four days he was admitted to the Cambridge Hospital in Aldershot, England. After recovering and taking leave, he embarked on the HT Karmala on 2 January 1919 for Melbourne where he was discharged on 1 April.

On Friday 7 March 1919 at the High Camp hall, a large attendance of local citizens gave Charles a warm reception and presented him with a sum of money in appreciation of his three years active service.

Charles received the British War Medal, the Victory Medal and 1914/15 Star. His name is recorded on the Pyalong Shire Honour Roll and at the Glenaroua Public Hall. The Axen family later moved to Mildura where Charles died in 1955.

Kilmore Historical Society just added a new Local Communities page to our site under About Us.

The Society does not deliberately collect material in relation to the following local communities, although the Society will consider accepting donations of documents covering these communities where no historical society exists.

In addition to the items listed on the page, it is likely that there will be specific information on these communities in records that appear to be Kilmore items. For example, some localities will be referred to in local histories on Kilmore, and Wandong areas are covered for some periods in the Kilmore Shire Rate Books. 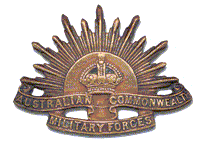 William was born at High Camp in 1888. His parents were Patrick Boland and Judith (Johanna) Mooney. He married Mary Ann Latto Bett, an Australian nurse, at St. Marylebone Presbyterian Church, London, on 2 October 1918.

William, an agent aged 26 years, enlisted in the army on 6 May 1915 and was assigned to the 14th Battalion, 7th Reinforcements. He sailed for Alexandria, Egypt, on the “Grantully Castle” arriving on 23 October 1915. He was admitted to the “Dunluce Castle” at Mudros on the Greek Island of Lemnos in December with jaundice.

He rejoined his unit at Moascar, Egypt, in January 1916, but was admitted to the No 3 General Hospital in March with appendicitis and mumps.

William was promoted to Corporal in France on 17 September 1916, then to Sergeant in October and Warrant Officer in April 1917. He attended a Lewis gun school in July 1917, and was promoted to Lieutenant on 16 November 1917.

He was again in hospital in December 1918 with tonsillitis and was discharged back to Australia with recurrent tonsillitis in March 1919 where his engagement was terminated in July 1919.

William served in World War 2 and he died near Lancefield in 1976 aged 87 years. He is listed on the Shire of Pyalong Honour Roll.