Published in 2013 by the Kilmore Historical Society

This book contains twenty one “Past” photographs of Sydney Street, taken over the period 1860s to 1950s, together with twenty one “Present” photographs taken in 2011 showing the same views. Each photograph has a caption identifying buildings and businesses. All photographs are black and white. The book is approximately A5 in size.

To obtain a copy of this book, download an order form can and send payment to: 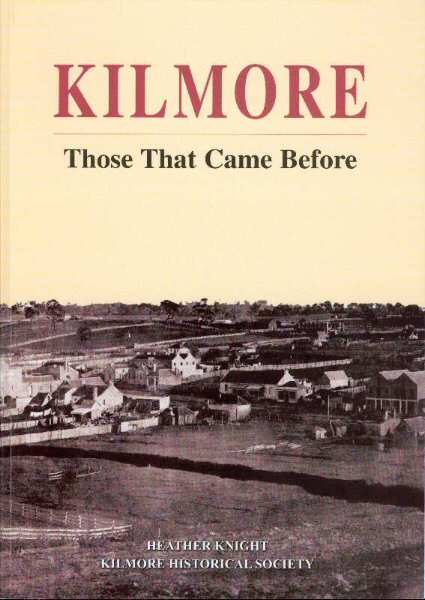 Kilmore: Those That Came Before by Heather Knight

Published in 2007 by the Kilmore Historical Society

This book of 254 pages is a collection of reminiscences of Kilmore which give a first hand account of life in Kilmore from the 1840s through to the 1960s. It has over 140 photographs & illustrations, many of them previously unpublished and two comprehensive indexes; a surname and a general index.

Through the words of those who were there, you will relive the horror that was “Black Thursday” and experience the fear of murderous bushrangers; be amazed at the passion aroused by the local elections; meet and admire the community spirited men and women that formed the institutions in Kilmore and shaped this community; be delighted in tales of a carefree, simple childhood and journey through the streets of Kilmore during the 19th century.

To obtain a copy of this book you can download the order form and send payment to: 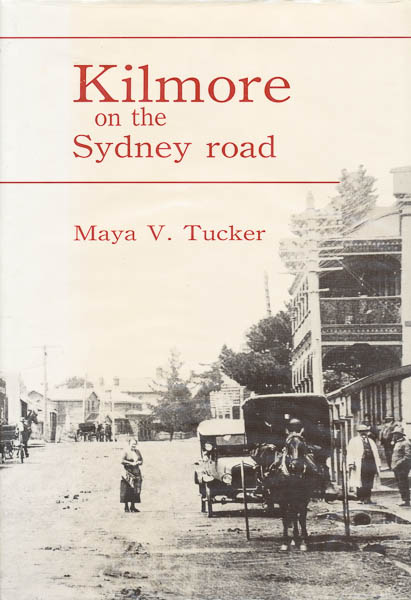 Kilmore on the Sydney road by Maya V. Tucker

Kilmore on the Sydney road is the story of a small country village, borough and Shire in Victoria. It is also a tribute to the pioneers who settled the district and struggled courageously to tame the land and give their children a better life than that provided by England, Ireland or Scotland.

Since its beginnings as a sheep run in 1837 and William Rutledge’s Special Survey in 1841, Kilmore Shire has seen a gold rush boom as an early service town, rivalry between townsfolk and farmers, sectarianism which became increasingly hurtful during the Great War and the 1920s, its main street becoming the Hume Highway in 1,924, the Hume Freeway bypass creating explosive growth as a dormitory suburb, and the durability of regional institutions such as the Hospital and Assumption College. – Dust Jacket

Kilmore on the Sydney road by Maya V. Tucker was commissioned by the former Shire of Kilmore to mark its 150 years of history. It was published in 1988 during Australia’s Bicentennial year.

To obtain a copy of this book you can download the order form and send payment to:

By Elizabeth Pidgeon and Heather Knight

Following the publication of the September 2001 issue of Kilmore Connections in which the probable origins of Kilnore’s street names were explained, we have received or discovered some updates/ corrections which we wish to put on the record.

Alfred Street—Named for Prince Alfred Ernest Albert, son of Queen Victoria. He was the target of an assassination attempt when he visited Sydney in 1867.

Allan Street—( Update/correction). Named for Robert Allan, miller. It would appear that there was another Mr. Allen (spelt with an ‘e’) in Kilmore and it was he that left Kilmore in 1865 to become a Primitive Methodist Minister. Perhaps he is the Mr. Allen after whom Allen Street is named. There was also another Allen family living in the district.

Robert Allan the miller, was involved with the Presbyterian Church.  J. A. Maher in “The Tale of a Century” , states that Alan’s mill (he spells Allen with an ‘e’ to add to the confUsion) was built about 1844 and was the first in the Port Phillip District. However, according to Lewis and Peggy Jones’ book ‘The Flour Mills of Victoria 184 9-1990,’ there were several flour mills earlier than Robert Allan’s, which they claim was probably built in 1847. Maher p.1 7; Jones p.103-I 05, Kilmore on the Sydney Road, Maya Tucker p.54; Kilmore Examiner 21 March 1S65; Kilmore Examiner 9 Sept 1858.

Boyd Street— Off White street. Named for John Boyd of the Wallan Wallan Station. He is buried in the Kilmore General Cemetery.

Branigan Drive—(Correction). Named for the Rev. Michael Branigan. Born at Olbridge, near Drogheda, County Louth, Ireland. Thought to have been born in 1834, he was ordained on 11 June 1858 and was not (error in the Sept 2001 issue), the first priest ordained in Victoria; this honour, according to Maher goes to Father Maurice Stack who was assistant to Fr. Branigan at one stage. Fr. Stack was ordained on 13th April 1851 in Melbourne. (Jim Lowden, Maher p. 71)

Broadhurst and Tootle—(Update) The Broadhurst brothers and Tootal brother were cousins. They were all members of the Manchester-based fabric firm Tootal, Broadhurst, Lee & Co. (Jim Lowden).

Butler’s Road—(Update) This road was named for John Matthew Butler, whose son Kevin John lived in “Lai Fale,” Butler’s Road until his death in 2000. (Jim Lowden).

Foote Street—(Correction).  Named for surveyor Henry Boorn Foot. He surveyed the route of the present Hume Freeway (not the Northern Hwy).  On the government survey map the name is spelt Foot and the use of ‘Foote’ is incorrect. We used the spelling used on the street signs for the street name article but used the spelling of Foot as preferred by the family researcher for the front cover and short article about Henry Foot in Kilmore Connections Sept 2001.

Graves Street—This street has also been spelt as Greaves Street in both the rate books and newspapers. Perhaps this is indeed the original spelling but was pronounced “graves” and the spelling has since changed.

Harrington Street, Kilmore East— (Update). Named for Gerald Harrington who died in 1995. He owned the property to the east of the Hume and Hovell Reserve and Hunts Road from the 1950’s. He married Bernadette Kelly, daughter of John and Bridget Kelly and lived in O’Grady’s Road near the former Kilmore East Hotel. On the sale of his property in the early 1970’s, it was subdivided and Harrington street was created at the time. (Jim Lowden).

Kelly’s Lane—Possibly after Patrick Kelly who owned land along the lane.

Mollison Court—Alexander Fullerton Mollison, overlander, squatter and a licensee of Pyalong Station which he took up in 1838. He was appointed a J. P. in 1838. Alexander returned to England in 1860 and travelled extensively in Britain and Europe with his sisters. He came back to Australia in 1873 to live with his sister Elizabeth at Kew, where he died.

Alexander’s brother, William Thomas Mollison joined Alexander at Pyalong in January 1838 andwas a joint manager of Pyalong Station. A third brother (Crawford Mollison) joined them in 1839. In1850 Alexander sold his share of Pyalong Station to his brother William Mollison. William consequently sold the property in 1866 to William Hamilton, the owner of Glenaroua Station. William Mollison bought a suburban block at Kilmore and was appointed an honorary magistrate at Kilmore. He was a bachelor and died in England in 1886. (Kilmore on the Sydney Road;  Stilts & Kenyon. Pastoral licences of Port Philipp. 116; www. trinity. unimelb.edu.au/library/address. Shtml)

Moore Court and Cottage Crescent—Moore cottage which was once situated on the Lancefleld Road, was reputedly built in the 1860’s by Henry Van Heems, an early hardware store proprietor, amateur and later professional photographer and inventor. Samuel Robert Moore purchased the property in the early 1900’s and established a contract shearing shed and dipping centre there with John Henry Walter in 1912. The cottage has since been demolished. (Jim Lowden).

Paynes Road—(Correction). The Payne family of “Woodburn” were noted for their Red Poll cattle in the 1920’s, (not Herefords), and exhibited them annually at the Melbourne Show from the 1920’s through to the 1960’s. Herefords were introduced to the Payne’s property “Woodburn” in the 1970’s. (Jim Lowden).

Piper Street—Mt. Piper was named by Hume and Hovell in 1824 after Captain John Piper, NSWcollector of customs. Piper appears to have been a sponsor of the expedition. (Jim Lowden).

Pontisford Court—The station plan gives the name as Pontesford. The initial holders were brothersHenry Holt and William Jones who transferred the run to A.D. & A.E. Tootal in 1846.

Railway Court—On some maps as Railway Parade. The present street signage indicates Railway Court. This short road off Sutherland Street leads to the former site of the Kilmore railway station.

Trainers Drive—(Correction). This road was named for horse trainers. Other street names in the estate are Hanover Court, after the famous US trotting stud and shoe manufacturer and Bremner Court, of unknown origin but could have been a Melbourne solicitor. (Jim Lowden)

With thanks to Jim Lowden who provided the meaning behind street names not covered in the Sept2001 issue.

For a more comprehensive look at the names and meanings of the Kilmore street names we suggest you read Kilmore ConnectIons September 2001 issue.

Back issues of newsletters can be purchased for $2.50 including postage within Australia.